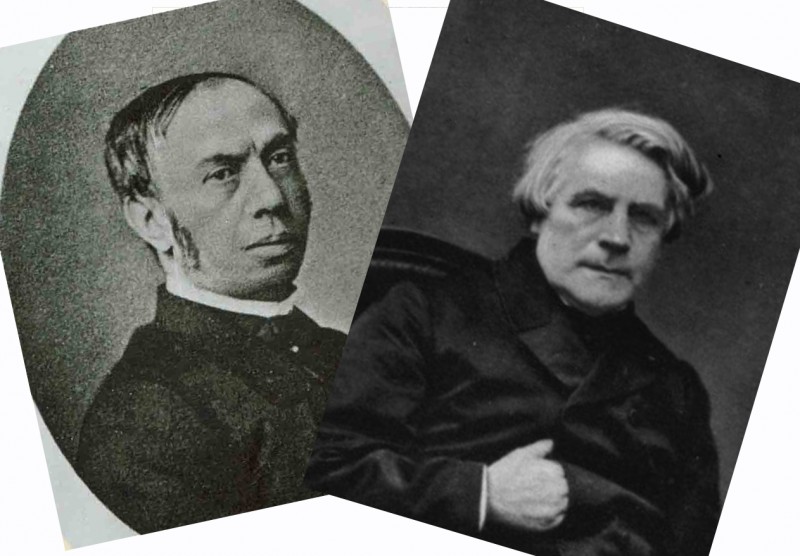 History of the Russian Empire knows many German descendants, even not counting the “Romanov dynasty”. Some of them brought benefit to the country, while some were just parasites. Unfortunately, we tend to remember only the latter category.

The photo on the right depicts a little-known German scientist named Heinrich Daniel Ruhmkorff. In school textbooks you’ll find nothing about this person. Narrow circles of people know him for his invention of induction coil (aka Ruhmkorff coil), which produces high-voltage pulses from a low-voltage direct current supply. According to the official history, the device was invented in 1836 and was the same induction coil that was used by Heinrich Hertz in his experimental electromagnetic devices in 1895.

The photo on the left shows a famous Russian industrialist of German descent named Fedor Schwabe. He is renowned for opening a shop in Moscow in 1840 that sold imported optics and that grew in a course of 40 years into one of the biggest and most successful enterprises in Russia. After the death of Fedor, his nephew took the lead of the company, which was only getting bigger. During the revolution, the company was suspended and seized by the bolshevisks, who eventually created a new company on its base called – «Геофизика» («Geophysics»), which exists even today. An interesting fact to mention – during the Russian national industrial exposition of 1882, F. Schwabe’s company was awarded the right to be an official supplier of the imperial government as well as the right to put the government emblem on their goods. Such honors were not granted for nothing - quality, company’s growth rate and other criteria were obviously considered.

So, what could connect those two persons?

Let us address the original source. Interesting bits are highlighted. 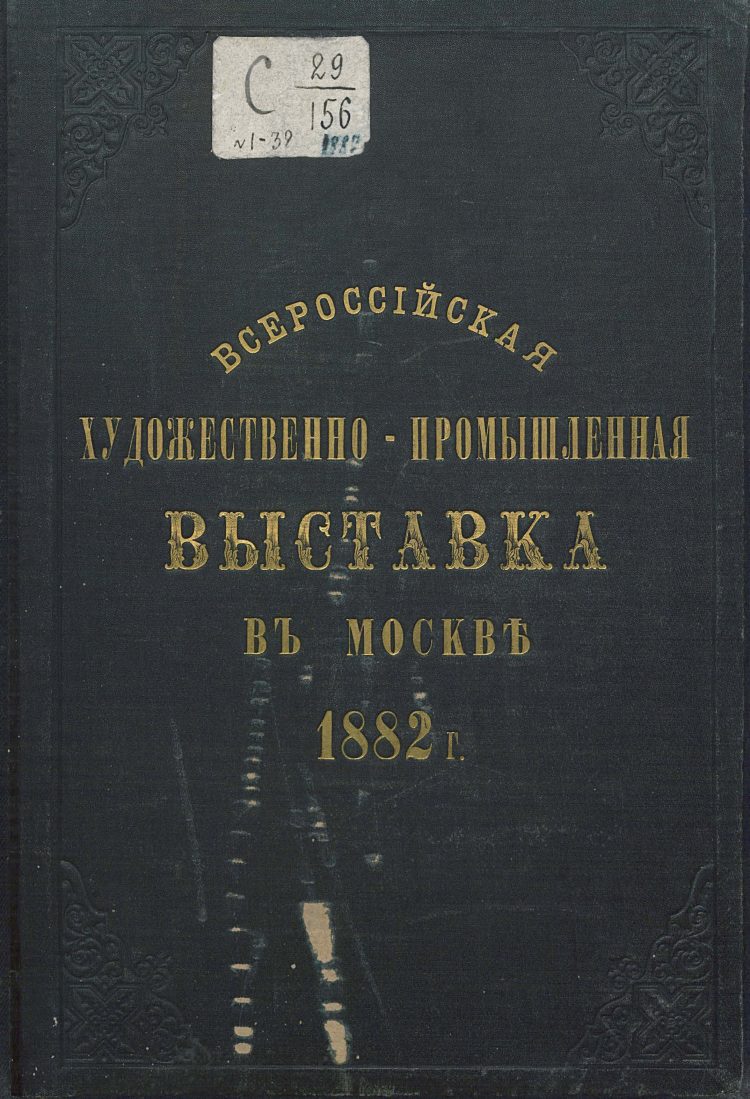 «Exposition of physical, optical, mathematical, geodesical, chemical and other devices and tools of Schwabe Company, in Moscow.»

[ The article praises the variety and quality of Schwabe Company’s goods, particularly pointing to the following devices/tools: Golp-Tayler machine (of a size that had never been produced either abroad or in Russia); aerial and mercurial pumps of Geysner system; Ruhmkorff’s induction coil (visually striking not only for its big size but also for being made disassemblable, for easier demonstration of its functions and inner parts); and many others. ]

It looks like F. Schwabe was a very talented and polymathic scientist and official history purposefully hides some facts about him. What we know about him and his company’s factories in Russia for sure is the fact that his employees were very glad to work there and that most of the workers had 25+ years of job tenure. Here you can some photos of Schwabe’s shop in Moscow (sorry for the quality, no better options available). 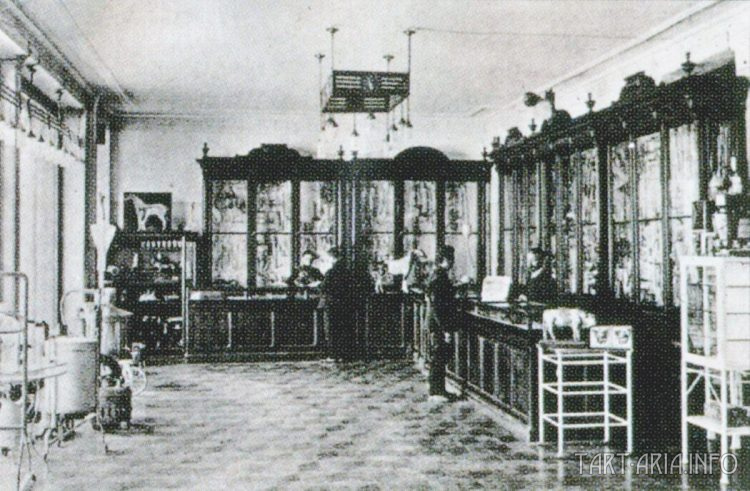 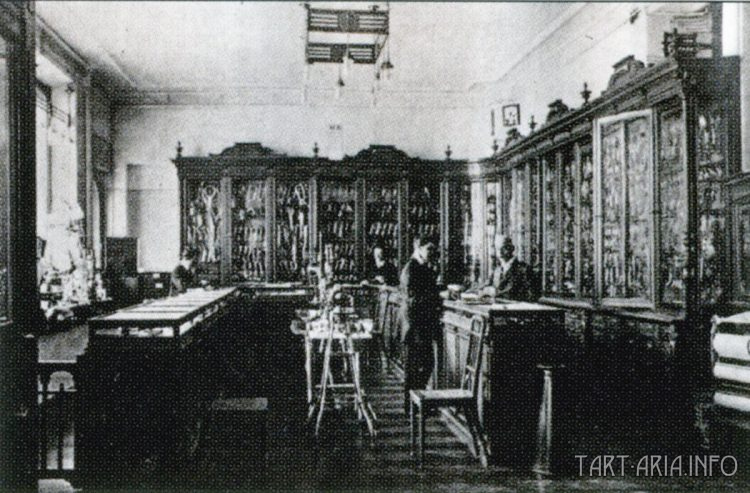 As you see, Schwabe’s shop was full of products of various types. Do you spot anything technically sophisticated in the picture?

The exposition, among other things, had the Ruhmkorff’s induction coil displayed at the Schwabe’s booth. Electricity was probably exotic at that time, and was perceived as an amusement. Here is a photo of that booth. Interesting. In the right corner stands Wilhelm Holtz’ influence machine but no Ruhmkorff’s induction coil. May it be the one on the left with a light bulb on its top? Maybe, but it is also possible that it is hidden behind the showcase due to the view angle.

Another notable thing was found in a catalog of products, produced by the Schwabe Company. Particularly among electrical devices. The most interesting bits are highlighted. 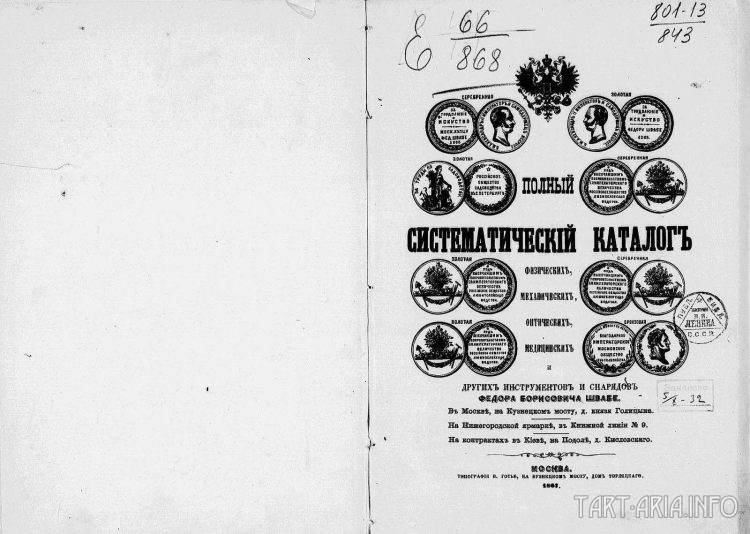 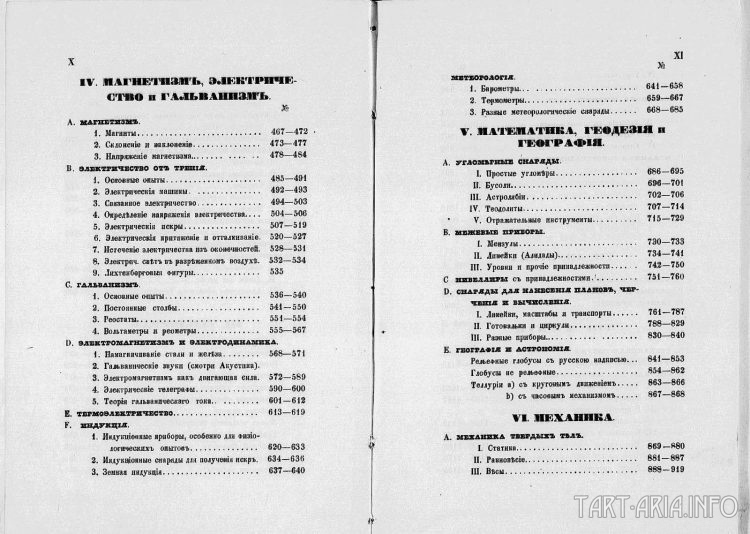 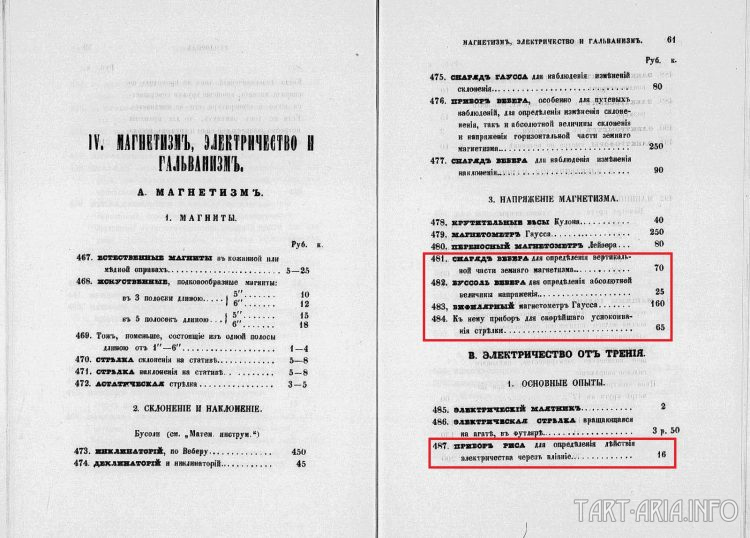 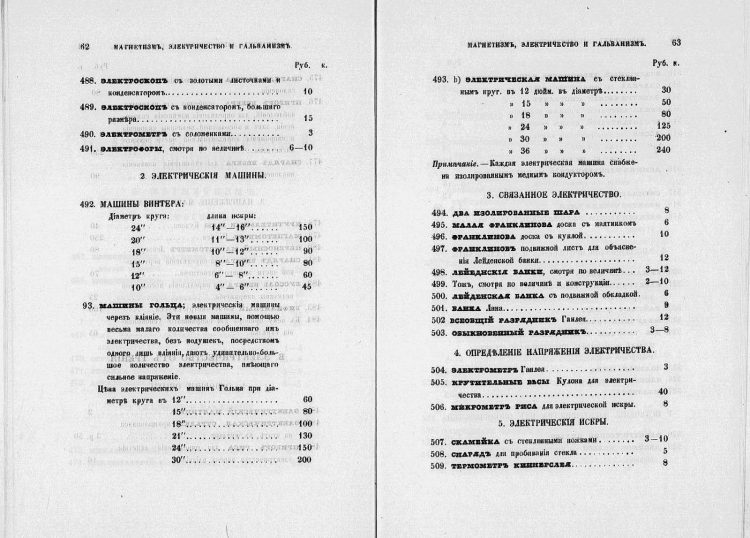 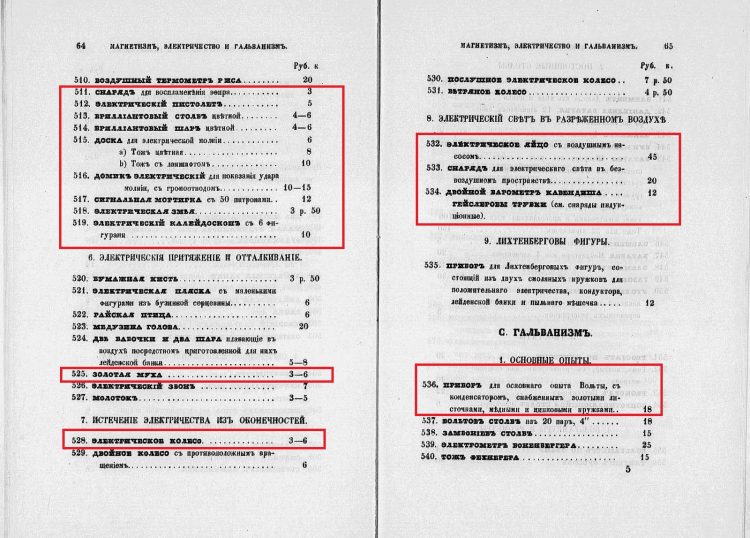 533. Electrical light device for use in vacuum.

536. Device for the main Volta’s experiment, provided with capacitor fitted with golden leafs and copper and zink (circles?). 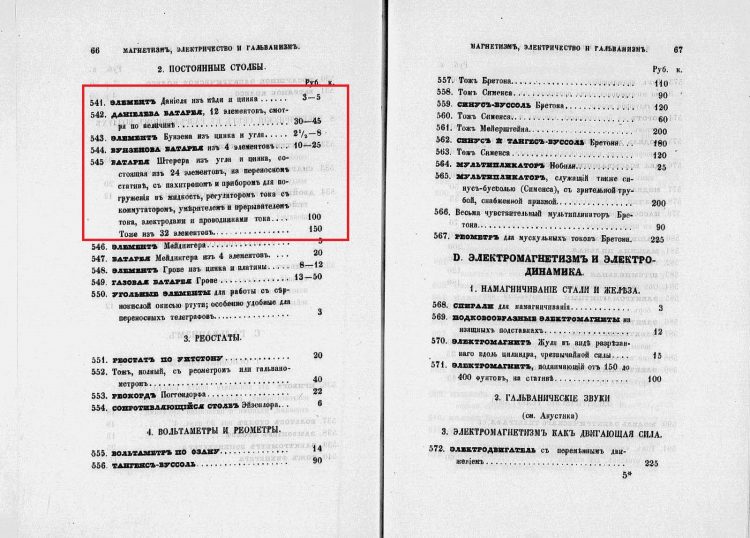 541. Daniel’s element made of copper and zink.

543. Bunsen’s element made of zink and coal. 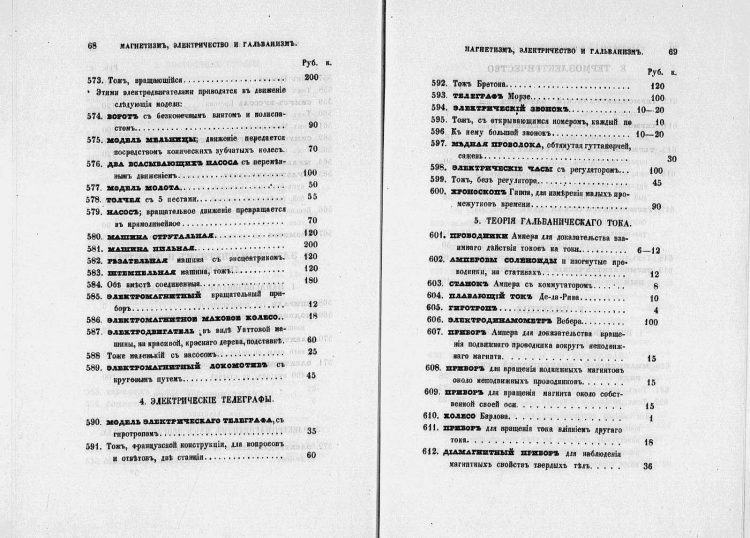 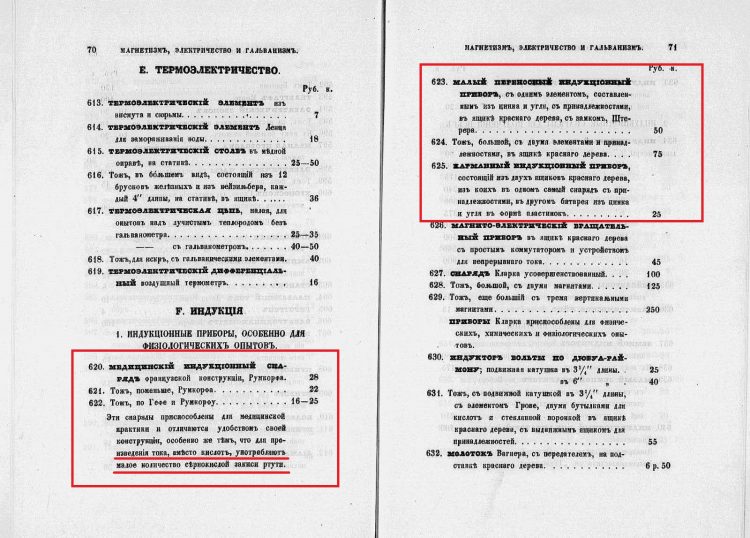 620. Medical induction device made by Ruhmkorff.

621. The same device by Ruhmkorff but smaller.

622. The same device by Ruhmkorff and Gefe.

These devices are intended for use in medical practice and are notable for their convenience and ability to produce electric current with sulfurous mercury oxide instead of acids.

623. Small portable induction device with one element, made of zink and coal, by Shterer (provided with a wooden case with tools).

624. The same but bigger, with two elements (provided with a wooden case). 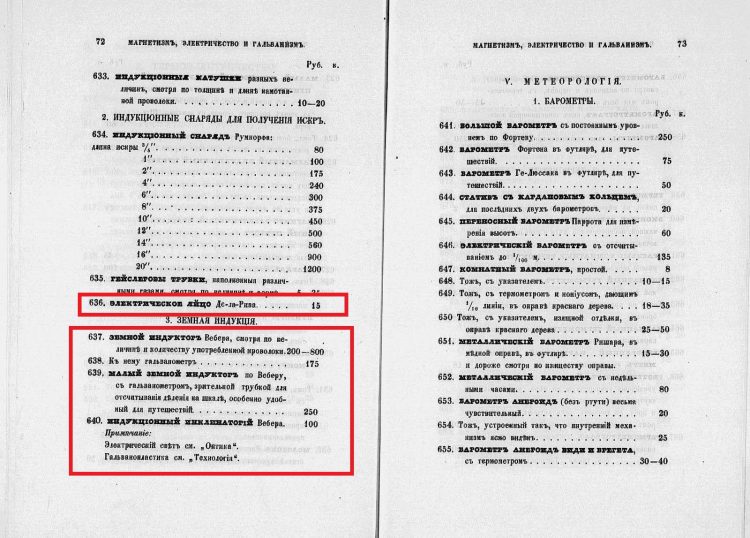 638. Galvanometer for the latter device.

I personally get amazed just by reading all these items. I have never heard of anything like that neither in school nor anywhere on the internet. It turns out that Ruhmkorff produced not only induction coils (listed in the catalog as induction device for producing sparks), but also some induction devices based on mercury oxide. If you look it up on the internet, you’ll probably find Mercury(II) sulfate, commonly called mercuric sulfate (HgSO4), which forms white granules or crystalline powder, which can be hydrolyzed in water and used to produce electrolyte. But why some items are put in the catalog in the «Standing poles» section and some in the others? What was the secret behind all these devices? The answer is obviously hidden somewhere else, but where? I think we should look at the photos again. 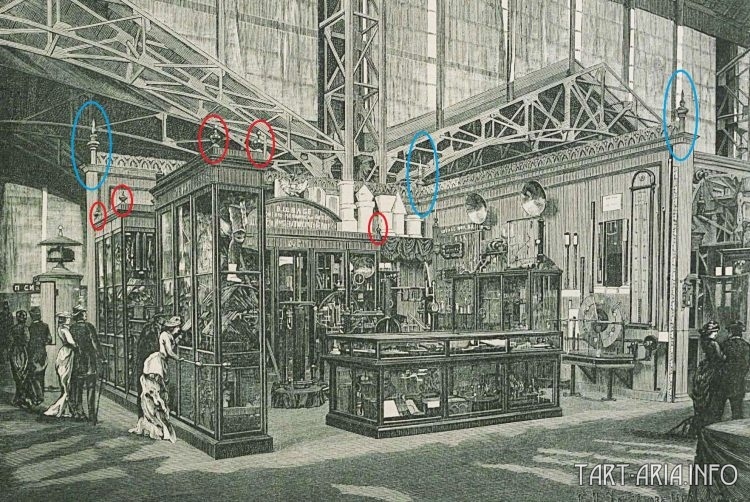 The odd-looking objects highlighted in blue have been addressed many times (in my articles) as elements of external atmospheric electricity systems. The same elements that have been observed numerous times on the roofs of old buildings, with the same array that is seen in the photo. As of now, the main elements of these systems are surely taken out, either completely or replaced by ornamental imitations. 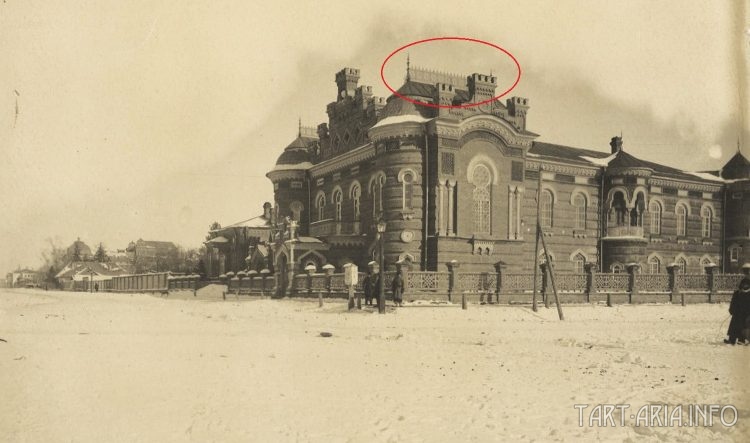 In past times it was nothing else but a inductor. It is hard to say what it powered in the booth, but most probably it was that same Ruhmkorff’s device, included in the catalog. The same elements, standing in showcases are highlighted with red. They were probably used to light up showcases and lusters (pay attention to the lusters, they hang on simple chains with no electrical wires around). 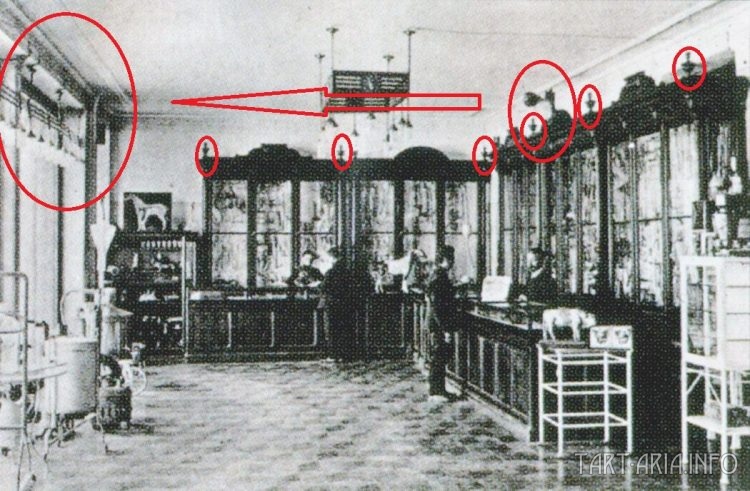 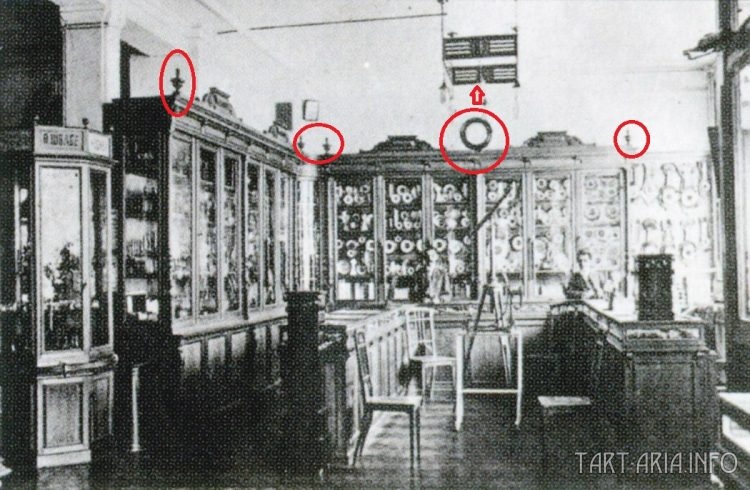 The same type of electrical system is used in the shop. The lusters are lit up not by wires but by metallic bonding of the building. This system functions pretty simple – domical construction on the top gives timing oscillations. The devices highlighted with red amplify those oscillations and wirelessly transfer them to the luster lamps. The lamps in their turn were of special design and with special filling.

Such devices, produced by Schwabe Company, used to be spread around the whole Russian Empire. 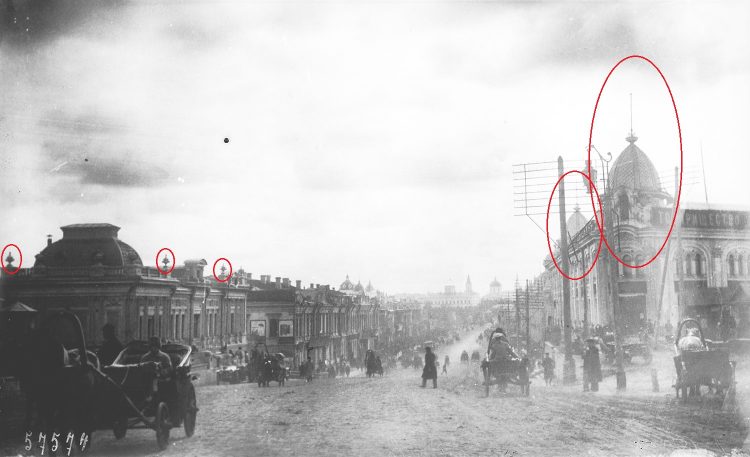 In the photo you can see Omsk of the late 19th century.

It looks like it’s not a coincidence that we know so few about Ruhmkorff and Schwabe, whose scale of activity in Russia used to be so big. Thanks to them, the giant empire had no scarcity of energy supplies according to the needs of that time. Unfortunately, when the bolshevik revolution happened most of the equipment and documentation related to atmospheric electricity was destroyed or classified. It is very likely that it was an order from some higher forces that was executed all over the world, aiming to destroy or hide all implementations of atmospheric electricity technologies.

Energy technologies of the...

The last of the Mohicans