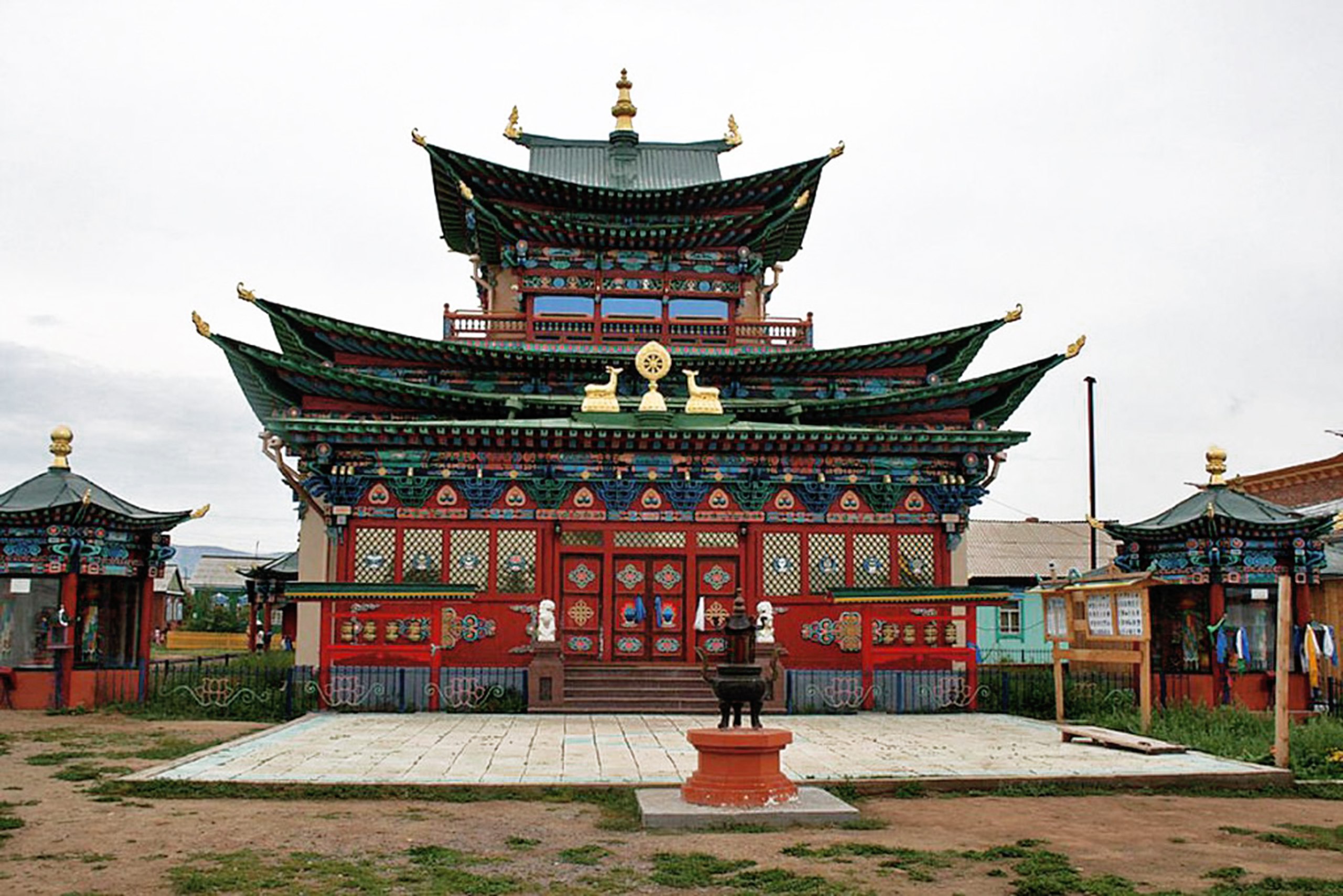 What mysteries did East keep? At first look, it seems that there were a lot of them, since East has always been considered weird and unusual. What if we look closer at the extant engineering constructions? What secrets of oriental philosophy will we conceive?

The last part ended with research of oriental (buddhist) temples in Buryatia (Russia), so we’re continuing it now. Let’s begin with Aginskiy datsan, located in Agin-Buryat region of Zabaykalsky Krai, Russia. As soon as you begin studying its history, curious facts begin to emerge.

Aginskiy datsan was built in 1811, in Bulaktui area, opposite Ulirtui moutain, on the left bank of Agi river. The first stone construction was made by some russian builders who had previously built Aninskiy datsan. The overall construction of christian (orthodox) church was consequently fashioned into a buddhist temple. (SOURCE)

The year 1811 shows up again, also known as “the year without summer” and the year when horrible flood happened in Saint-Petersburg. Moreover, many historical accounts mention this year as a year when government decided to destroy most of ancient forts and bastions, which were actually destroyed by a giant cataclysm. That cataclysm swept over giant distances, from north to south, taking down and covering with dirt everything on its path. At some point intensity of destructive wave lowered, so some infrastructure managed to withstand the cataclysm. It seems that the orthodox church we mentioned before was part of those buildings that had survived. Subsequently, the church was turned into a datsan. It was quite easy to find. Here is the late 19th century photo:

Basically, why would someone turn an orthodox church into a bhuddist one? The only conclusion that comes to mind is that either the previous dwellers were destroyed by a cataclysm or they just migrated to a better place. The building in its turn was settled in by people of another faith who redesigned it into something like this:

A photo of its modern look:

Looking at those three photos, I constantly get an idea that this church used to have an additional (ground) floor, which currently lies underground. There are several indicators that make me think so, but only an architect could tell for sure. Judging on the Sun’s position in the photo, the entrance side of the building is the eastern side, i.e. altar. Another important question is – what’s the main difference found in all three photos?

Experience has proven that if a new and an old photo of the same place demonstrate some differences (even minor ones) – they are the key that we have to look into. Moreover, near the the buddhist temple (that was once an orthodox church) there is another building, that was already there at the time when photo was made (19th century):

This one resembles eastern architecture more. It’s hard to say whether it’s ancient or not, but that fact that bhuddist and orthodox temples stood together still remains. Moreover, it’s not a coincidence that such cities as Verhneudinsk, Troitskosavsk and Belotsarks vanished from maps of Russia – all traces of Tartaria have been thoroughly erased. Now let’s get back to some details that were encircled in the photos.

These common details or architectural traits are found in various forms on numerous buildings, be it Buryatia or Sumatra.

The photo above should be looked at closely. What does the building’s roof consist of? It looks like it is made of some interlaced wire rod, where horizontal wires are upbent and vertical are covered with some ceramic pipes with a filling. The lanterns deserve individual attention. There seem to be some lightbulbs inside, while the furthest lantern has its lightbulb fallen out. Similar details can be seen in the photo from Japan (further above), but that’s a topic for another discussion. Speaking of roofing again, the assumption that it was made of metal (and made purposefully of metal instead of bamboo) is proven by another photo – a photo of fires in Shanghai and Hong Kong.

The photos prove that all buildings of that type had metal framework under roofing material, which covered it from physical stress. What was the main purpose behind putting metal into roofs?

Pay attention to the encircled part of the roof. It look more like a corrosion aftereffect rather than mechanical damage. The ornamental elements installed on the roof’s edges provoke questions too. They are made of neither wood nor ceramics, otherwise they would not last long. Then, what are they made of?

The answer can be found in other photos of pagodas and datsans. This image (even though it’s not actually a photo) can clear up some details.

That’s how multistoried pagodas used to look (the ruins of which were shown in the first part). Metal parts there are depicted in aureate color. All edges and lanterns are made of metal (or wired rod), though we can’t say for sure, what exact metal producing technologies they had at that time (without considering what official history tells us about this period of Chinese history).

So it turns out that while the rest of the world produced metal objects (like the dome you saw in the previous picture) using copper plates (with gold plating), the East used interlaced metal wires. If we imagine that constructions located in East are designed to gather and conduct electromagnetic waves out of atmosphere the same way as similar constructions found in the West, then what was the difference, in terms of using another type of metal? More primitive technology required engineers to move from quality to quantity, so they just multiplied the number of metal domes and other technological components in order to gain the desired effect. But what were other minor components designed for (like odd-looking statues on roof edges? To answer this question, we have to go back to the musical booth, described in this article.

What similarity can be found between musical booth from Paris and a pagoda like this?

Curiously enough, there are plenty of similarities. Lanterns, odd vases and columns, only the roof looks different. Nevertheless, the photo below shows us that metal and metal-like elements have the same color which can’t be confused with anything else. It turns out that vases, standing under menoras on Paris musical booth roof’s edges, are the same type of objects as those elements that we see on elevated corners of a pagoda in the photo.

This situation (or technology) can be compared to string musical instruments. Their design and size may differ, but the functioning principle and application stays the same – they produce acoustic vibrations. The same with our constructions, the technology can be more or less sophisticated, but all use metal and vase-looking jars, with a special liquid substance.

So, as you see, the secret of oriental (and western too) chrism and wellness lies in mundane technologies that used to be present in various temples and religious constructions that are scattered all around the continent, and have many similarities in design, that are not so obvious at first sight. The truth is that the whole continent used to be one united country/state, so everyone shared the same knowledge and culture. That’s why constructions found in opposite ends of the continent share the same technology and design.

Energy technologies of the past. Crimean war